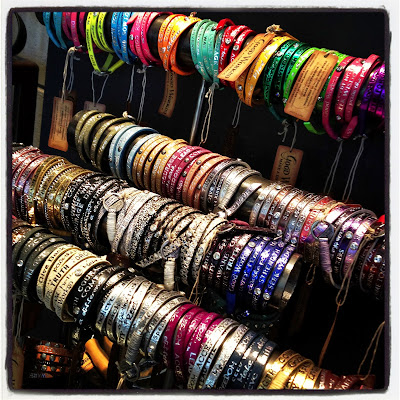 My mother has always joked that it is pretty much impossible to get me past a shoe store or jewelry counter, and even now this pretty much holds true.  We can talk about my shoe fetish another day, but like most females, I am continually attracted by colourful, bright and shiny things, so it's not too difficult to guess that jewelry - in all its shapes, sizes, guises and price ranges -  is a continuous and enduring favourite of mine, so naturally I was delighted to stumble upon the wonderful, downtown jewelry boutique 'Posh' on Ellis street.

Like many females, I am also a big fan of self-realisation and empowerment, and of trying to do good for the planet, so when I found myself in the above mentioned shop, drawn to a rack filled with colorful, sparkly metallic leather cuff bracelets, emblazoned with words like 'Strength', 'Dream', 'Courage' and 'Wisdom', it was like a spiritual shopping convergence.  The bracelets are made by a company called 'Good Work(s) Make a Difference, who donate a portion of their profits to a variety of good causes, ranging from moving homeless families into fully furnished homes via their own 'Home Sweeter Home for the Homeless' project to donating to Tijuana orphange 'Por La Infancia', or providing beauty treatments for under-privileged single mothers in greater Los Angeles.

According to their website, "Good Work(s) Make A Difference® is a company created to promote lifestyles of optimism, goodwill, and compassion through fashion in order to inspire and elevate humanitarianism, and is determined to deliver the most fashion-forward, uplifting, inspirational bracelets and accessories that contribute 25% of net proceeds to charitable organisations that make a meaningful impact in people's lives and communities".

I love that Posh's owner Kate Morgan has found and stocked this great company, and -- with less than 60 shopping days til Christmas -- might I suggest these bracelets (ranging in price from $30 to $55) would make GREAT stocking stuffers or gifts for some of the ladies in your life - or men, Steven Tyler, Zac Brown, Gerard Butler and Will-I-Am are all fans. That way you can feel good about two things: 1) that you have ticked another item off your Xmas 'to do' list, and 2) you have helped the less fortunate while doing so. Win-win methinks. 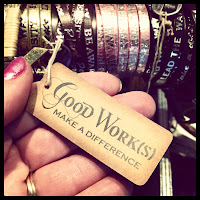 C is for Concert, D is for Dixie Chicks 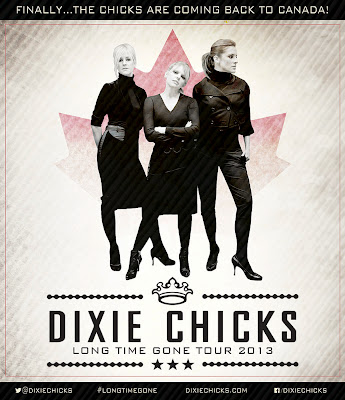 In my former incarnations I have had several jobs in music-related industries.  I once interned for RCA Records in Los Angeles, and also worked for four years at The Georgia Straight in Vancouver. One of the upsides to these jobs was being able to feed my fetish for live music via the company guest lists, and I was able to see a lot of really great bands, from really great seats, for very little (or no) money.

Even after leaving the world of the freebie, I continued to love live music, and have seen everything from K.D. Lang playing a private birthday party for her manager at a little club in Vancouver, to Blue Rodeo at a 200 person venue in London, to Elton John at the Los Angeles Sports Arena, to Live Aid (yes, the first one) at Wembley Arena. And, of course, having spent over 25 years living in London spoils a person for choice, as almost every band every known has played there one time or another.

Well, Kelowna has Prospera Place, I am happy to say; a world class venue, for tours of a world class nature.  It has, in the last year, hosted concerts by John Fogerty, Journey and Sting, and last night went all out country with The Dixie Chicks. The fact that bands of this stature fit Kelowna into their busy tour schedules speaks well of the city, and also of the bands themselves and their taste in cities.  I mean who wouldn't want to spend a day or two in this lovely place, even if working.

Sadly, I didn't get to go last night, as my poor hubby had man flu and I was busy mopping his fevered (not-so-much) brow, but you had better believe I'll be first in line for Blue Rodeo in the new year. That's January 6, folks. Mark your diaries now.
~
Prospera Place: 1223 Water Street, Kelowna | 250 979 0888
www.prosperaplace.com
Posted by Unknown at 21:31 No comments: 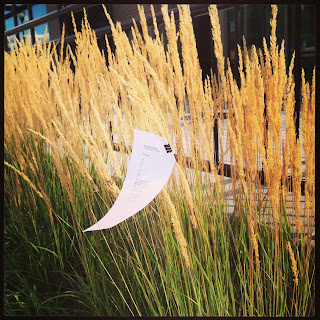 Scene: finishing work and heading to the parking lot past the Bean Scene Coffee Shop on Dickson Ave. Out of the corner of my eye I catch sight of a piece of paper fluttering in the breeze.  Closer examination shows said piece of paper clipped onto the waving decorative grasses planted alongside the sidewalk.  Even closer examination reveals... a poem. A good poem.

It turns out this is a poem by Lesley-Anne Evans, a Kelowna resident, poet and poetry busker and blogger who is behind popuppoetry.ca.

I love a good idea.  And when it is a creative, inventive, innovative idea, so much the better. Pop-up poetry is all of these. There is something just so... poetic... about stumbling upon poetry in unexpected places, and the words on that page, in that place, setting the tone for your day.

According to her website, Lesley-Anne was born in Belfast, raised in Toronto, but has been in the Okanagan with her husband and children since 1993. As a poet, Lesley-Anne has written that one of her her driving forces is 'to connect with people, not just deliver words', and she has set out to find interesting and inventive ways to do just that.

In addition to her stealth poetry forays with popup poetry, this summer Lesley-Anne was Kelowna's first 'licensed' poetry busker with Festival's Kelowna, and more recently created an interactive poem in collaboration with the audience at Pulp Fiction Coffee House, which you can read about at http://laevans.ca/anfanger-schrumplig-du-bist-schon/ .

Knowing Lesley-Anne is out there, setting the streets on fire with her well-crafted words, just makes me... happy, and I hope to run into more of them - and maybe even the poet herself - soon. 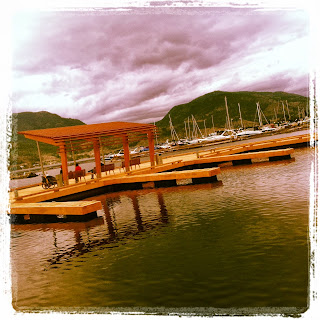 This is an idea long overdue.  Despite having only had one summer in the Okanagan, my husband and I - newby boat owners that we are - have often talked about how great it would be to be able to boat downtown, moor up and do a little shopping and lunching. Well now we can.

Developed by Westcorp, Downtown Marina and Public Pier boasts 68 pleasure boats slips, with hourly and daily rental available.  Some of the slips will be first come first serve, but some will also be open to reservation, ensuring that your lunch reservation doesn't go to waste because you can't find suitable 'parking'. Prices are reasonable too, ranging from $5 for a quick 15 minute or less trip to the 'offie' (that's liquor store in Canadian) should you want to pick up a bottle of wine for your on-the-water picnic, to $50 for up to 8 hours; a two hour lunch window will set you back $20. (Full rental rates can be found at http://www.kelownadowntownmarina.com/moorage.html .)

The Marina also has raised piers for commercial boats, fuel and toilet facilities (hurrah! on both counts), boat and Sea-doo rentals, and the 350 foot floating pier is also accessible to pedestrians, hosting a number of benches from which to sit and watch the world go by.

Yes, in Kelowna, cars are so last year.

You can find out all about Downtown Marina and Public Pier at:
http://www.kelownadowntownmarina.com/
Posted by Unknown at 12:11 No comments: 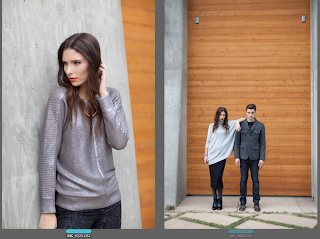 I love a good fashion shoot, and in my time as a fashion stylist/editor I have been lucky enough to shoot them in London, Paris, New York, et al.  The creativity that comes into play creating beautiful photos is totally inspirational - and addictive - so imagine my delight in being able to stage a world-class shoot here in Kelowna, using nothing but home grown talent.

The planets must have been in alignment, because I managed to connect with Lindsey Fisette, a wonderful 23 year old Kelowna-raised fashion photographer who is now based in Australia, but was just home for a month on holiday. Lindsey then hooked me up with the fantastic Bri Stein, a local - and really talented - makeup artist, and models Emilee and Matt from local agency Deja Vu.  My Icon Okanagan connections netted us hair styling from Annah at Cream Hair and Make Up Lounge, and clothes from MacDermott's Menswear and Justin Paul Fashions. And lastly, we were able to organise a simply amazing location in Bo.tegga Farm Inn - a boutique hotel and working alpaca farm.

Next thing I knew, Go Okanagan at Shaw Cable were interested in what was going on, and decided to pop down and shoot the shoot - if you know what I mean.

It was a wonderfully exciting and productive day for all involved, and the results were - if I do say so myself- pretty darn gobsmacking.  But if you don't believe me, you can see for yourself... the shoot is in the new issue of Icon magazine, which you can pick up from numerous locations around the Okanagan or online at http://www.icon-okanagan.com/articles/. You can also see the shoot, and learn more about Lindsey on Go Okanagan's website at http://www.shaw.ca/ShawTV/Kelowna/Shows/ShawTV/ .

All-in-all, it was a good days work, and - hopefully - the first of many to come!

... has been a fashion and lifestyle journalist in , for over 15 years.

Her career highlight is a toss up between interviewing Cate Blanchett backstage after the Nicole Farhi show in , or Karl Lagerfeld at the Chanel haute couture presentation in . Meeting Debbie Harry was pretty cool too.

DL-M has recently relocated to , with her husband, whoodle and cat, where she is fashion and advertising consultant for Icon magazine. She LOVES the Okanagan, and thinks you should too.